Perils of institutionalization on display. When cute and clever triumph, audience loses. Based on first half, easily the worst show I have ever seen at Portland Playhouse. A slight, disposable play made considerably worse by awkward staging, environmental challenges, thrown together feel. Artifact of deadly new self-regarding Portland. Naked emperor.

The weekend is coming. And with it, your roster of entertainment possibilities. Which are legion.

Just about the most exciting thing on the spring calendar is finally here: Portland Playhouse takes on Anne Washburn’s MR. BURNS. You’ll travel indoors and out to three different sets for this epic. Opening night is Saturday.

Also jockeying for position on Saturday night is PICA’s 20th anniversary gala: TADADA!. Come for the dinner if you’re feeling flush. But whatever you do, don’t miss the after-party helmed by Pepper Pepper. It’s all happening at The Redd, Ecotrust’s new event space on SE Salmon Street.

And still ANOTHER Saturday night gem is a remount of David Saffert’s Liberace pageant at Curious Comedy.

And for your Sunday night, perhaps you’ve heard of a certain play by Richard Greenberg coming to town? No, you probably haven’t heard of it that way. But you probably have heard that two TV stars from Grimm are in a show at Portland Center Stage. Ah yes. That one. Sunday night is the first preview.

And if you’re the pro active, plan ahead type – next Monday at PCS the Improv All Stars are back.

It would be hard to miss the beautiful imagery all over town for the upcoming show at Portland Playhouse.

But in case you have – here you go.

This is that “show before the show” we love so much. A poster you might actually want to take down and steal.

But do appreciate how good it looks.

MR. BURNS, A POST-ELECTRIC PLAY by Anne Washburn opens May 16 at Portland Playhouse. 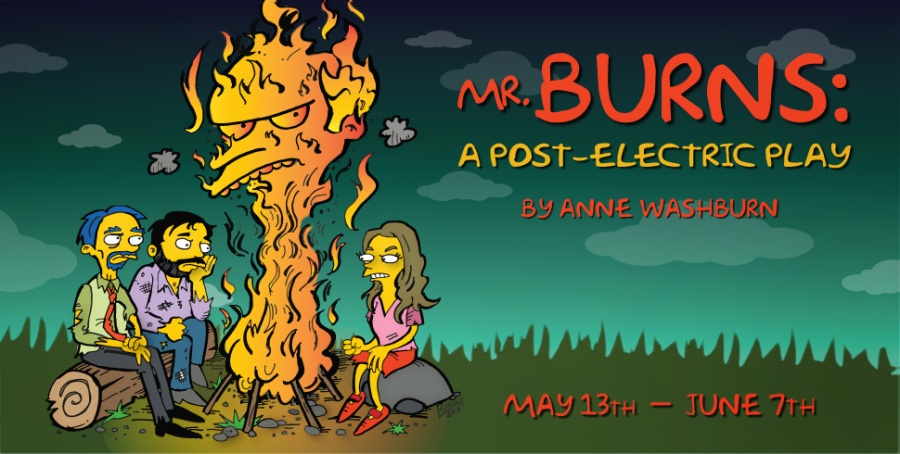 2016 will be a slightly smaller year for Portland Playhouse, with a larger focus on music.

The NE neighborhood theatre will be doing four shows next year (three with music), down from the normal five of the last three seasons.

Headlining season number eight is the exciting HOW WE GOT ON by Idris Goodwin, a story about three teenagers in the midwest coming of age in the hip hop birth era of the 1980’s and Peter Pan hit PETER AND THE STARCATCHER.

How We Got On by Idris Goodwin | September 23-October 25

All the promise of Portland’s neighborhood theatre on display in this hand-crafted reworking of a story we know by heart but can see anew any number of times. Perhaps just a touch loud at upper end. Wouldn’t a real ship anchor chain sound great dragging over that wood floor?

In an era when Marxism sounds like a museum piece, it takes some work to tune in here. Duffy Epstein is terrifically good. At last, the intolerable 3 year long absence of John Steinkamp from Portland stages comes to an end. Brilliant closing monologue. Key Jewish social context inadequately conveyed.

And yes, the first Amy Herzog production to ever hit Portland got started last night at Portland Playhouse.

All photos by Brud Giles.

It may be gorgeous outside NOW – but that won’t last. So when the rain descends, remember there are a bunch of new shows hitting the airwaves this weekend.

First, there’s these new baubles to dangle in front of you:

And then in the already-open-but-unmissable category:

The Aces at IFCC

Post-Depression Pittsburgh as Boy Willie Charles returns home with a plan to sell his family’s heirloom piano so he can buy himself a piece of land. But his sister Berniece won’t let this precious heirloom-and all of the memory, pain, and sacrifice it represents-leave the Charles family. Who will win out when a family’s legacy and its hopes for the future collide?

Dickens’ classic ghost story returns! Join us for an authentic, music-filled journey to nineteenth-century London in which greedy Scrooge learns his lesson and Tiny Tim has the last word.

It’s not a performance, a workshop, or a public conversation– it’s all these things. HOW TO END POVERTY IN 90 MINUTES… invites audiences to consider the question: How do we talk about, wrestle with, and attack poverty in America? Join Sojourn Theatre and a rotating cast of community cameos for an eclectic 90 minutes of spectacle, dialogue and live-feed hocus pocus that culminates with each audience voting on how to spend $1,000 cash (from ticket sales). Portland Playhouse invites you to participate in this unique experiment of collective decision-making and shared responsibility; an experiment that asks, night after night: Can the arts help make our world a better place?

What does it take before we finally “let go” and seek help from those who care about us? Juliana Smithton, an accomplished scientist and pharmaceuticals pitch-woman, is a dominating personality who’s always in command. Until, that is, a fleeting bout of dementia turns her world upside down. What is “real” and what is merely the fabrication of a brain under siege?

Yes, THAT Mr. Burns. Acclaimed playwright, and ex-Portlander, Anne Washburn leads us into an unlikely post-apocalyptic (and post-electricity) future in which survivors pass the time – and maintain a grip on their past – by recounting episodes from The Simpsons (specifically, the episode Cape Feare… DUN DUN DUN DUNNNN). As they are told and retold, these snippets of pop culture become the stuff of epics, myths, and legends among the survivors. Portlanders – who are doubtless aware that Simpsons creator Matt Groening once called Portland home – are in for a wacky, geeky, unapologetically original theatrical treat.