If you believe all your theatre company needs to create great work is more money, a better venue, and some bigger names – think again.

Unforgettable theatrical experiences – for both the audience and cast members – are often the product of two simple ingredients: vision and passion. And maybe one more: an intimate space.

Such was the case in the fall of 2007 when Third Rail produced its third play by company favorite Craig Wright.

GRACE, the tale of two Jesus freaks from Minnesota who move to Florida in search of holy real estate success, is likely burned into the memory of any Portlanders who saw it in the North Portland IFCC setting. Four top flight performances, the closeness of the action, and the chilling sound design all made for a truly memorable theatrical experience. In hindsight, the production took what was there on the page and improved upon it. 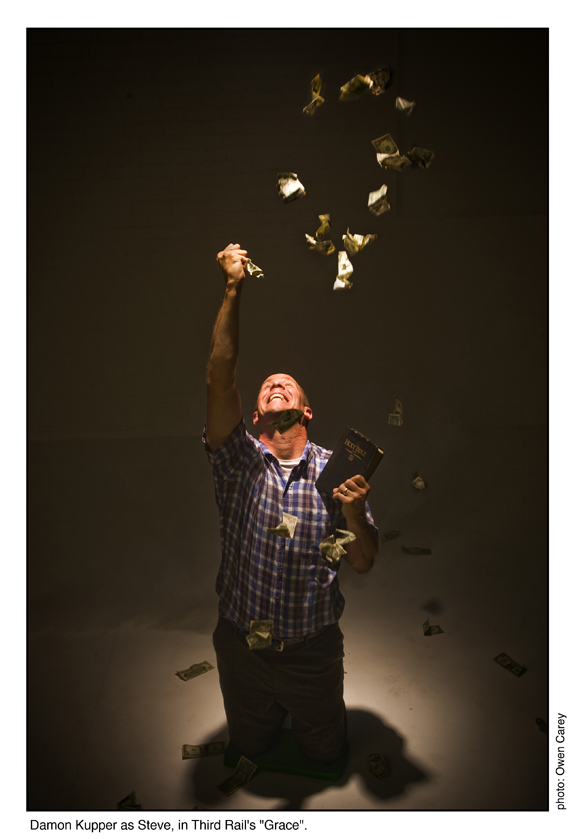 Cut to 2012 when GRACE hits Broadway with some big names attached. It’s an odd choice for The Great White Way. Downtown at somewhere like the Barrow Street Theatre (where director Dexter Bullard helmed a scorching version of BUG by Tracy Letts in 2004) would seem a better match. I wondered if the show’s intensity could survive on a big stage uptown. But the NYT review was generally good, so I figured what the heck.

Walking past the merch rack in the lobby of the Cort Theater on 48th street, I glimpsed the first sign that all might not be well. The show’s tag line on a shirt read: “Have faith. And a back-up plan.” Uh oh. You could feel that irresistible marketing desire to turn any show, however dark, into a fun-loving comedy.

I was curious how that could work here. GRACE, remember, is a story where all four characters die in a senseless gun massacre. And that’s after one of them survived the Nazis as a kid (but not before they poked his eye out with a bayonet and forced him to rape his child neighbor). Not many back-up plans in evidence.

Luckily, the show was not turned into ad hoc slapstick or riffs on Frances McDormandesque midwestern accents. But sadly it was also not very good.

Paul Rudd, who plays the chipper Steve (of Christian-themed development partnership “Sonrise LLC”), can hop around on stage and gesture and talk fast. But he sure can’t act. He came nowhere close to the impact Damon Kupper had in creating a normal, believable guy – who believes a little too hard for his and everyone else’s own good. In fact, many of the lines I can still hear Kupper delivering as if it was the Third Rail version I saw last night (and ones that got big reactions from the audience at the time) like “That’s a cute little car” and “Hold that thought” here passed without notice.

The good news in the Broadway show is Michael Shannon (another BUG veteran). As the scarred and distraught Sam, he’s good. Very good. But is he better than Leif Norby was? Not at all. Shannon is too monotone and bombed out, whereas Norby was raw, angry and in real crisis.

Ed Asner is the extermination man. His attempt to gin up a German accent only muddles half his lines. He was far beneath the force (and humor) delivered by the much too seldom seen Doug Mace.

And Kate Arrington as Sarah seemed to be channeling a kind of dumb and dumber valley girl. It was hard to understand who she was, how she would have married a guy like Steve, and what she might need from Sam. Once again the comparison between NYC and Portland tilts to Third Rail’s advantage. Stephanie Gaslin was much more honest and real. When Gaslin said “I don’t think we should be married anymore”, you knew the world was ending. In the Broadway show it was no big deal.

Just goes to show, bigger is not necessarily better. In this case Broadway audiences are paying way more for much, much less than audiences in the tiny IFCC enjoyed five years ago.

Other GRACE trivia: In the Broadway version, the opening sequence in which time is running backwards was lengthened and embroidered. Instead of the actions (murders) simply occurring and following each other in quick sequence, Steve sits on the couch hyper-ventilating for a while before he kills himself. It felt very filmic but also seemed to diminish the intensity.

Also, the ending of the play, in which the murders we saw going backwards in the beginning play through again in forward sequence, was altered. The Broadway version ends with Steve pointing the gun at Sarah – but then blackout after “We can’t”. We do not then roll through her murder and Steve’s suicide again. This felt like an attempt to slightly soften the ending (i.e., have a “back-up plan”?).